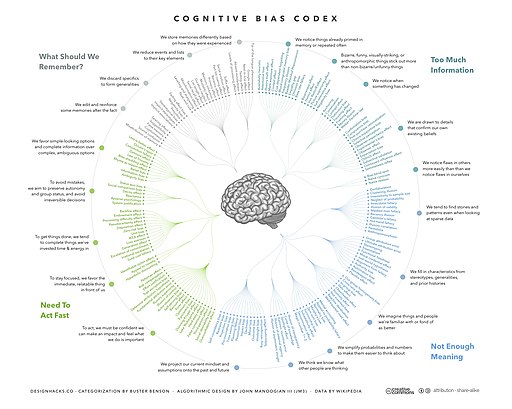 2016 was the year of cognitive bias bifurcation in America (in particular cognitive dissonance). I won’t go into the details of the election, but @ScottAdamsSays has it down pat.

We know – or should know – that the mechanisms governing evolution via natural selection weren’t “seeking out” brains free of fallacy, bias, sterility of emotional inputs and outputs, nor brains operating like computers.

And yet, here we are: billions of years since the first self-replicating polymer, sensory nervous systems capable of a wide array of tasks from developing mathematical understandings of our world, constructing logic circuits out of silicon and electrons, and even algorithms like the scientific method capable of dissecting the wonders of consciousness itself into manageable chunks of knowledge. It’s as if Thelonious Monk composed us out of entropic notes of molecular vibrations.

And yet (again), here we are: believing in strange ideas, miscalculating simple probabilities, stuck in our own reality tunnels, spending almost all waking (and dreaming) hours in non-logical worlds shifting from moment to moment. It’s why two equally intelligent people from similar backgrounds can have diametrically opposing political views – each fully incapable of considering that their minds are programmed by their own or others’ cognitive biases and emotional charges.

Add Social Media to the mix and the moron is the medium. Apply Symbolic Logic to any Facebook thread and the chance of finding the comments passing through any of the truth functions approximately 0%. Curiously, the Hungarian composer Ligeti, who witnessed the terrors of Fascism and Stalin, also showed us how susceptible we all can be to the metronomic submission to ideologies.

In almost every element of life, emotion trumps reason. That isn’t necessarily a bad thing: Emotion evolved out of and over the substrates of natural selection, and enables us to achieve powerful feats. We’d die without emotion. (Perhaps any future “artificial fully-consciousness” being won’t survive without some capacity for emotional capacities that may be necessary to process external and internal sensory data.)

How many medical diagnoses and treatment plans are impacted everyday by cognitive bias? One? Dozens? Tens of thousands? Think of the costs in human health, economic waste, and forgone hypothesis-testing to challenge practices!

Except for short durations, we continually deploy cognitive biases and we persist in emotional ingongruity. Self-attention is a necessary but not sufficient condition for Cognitive Objectivity and Emotional Clarity. But as we travel up the exponential curves of technological changes and their ramifications, our elbow room for cognitive bias and emotional fog narrows as our need for cognitive prowess and emotional clarity expands.

Why? Well, until now we could believe in almost anything and still get by because the reaches of damage were limited. If one believed that people who don’t pray to the Spaghetti Monster should be executed, the ability to execute non-believers had technological, geographical, psychological, political, cultural and other upper-bounds.

Today one person or small group, armed with the right kind of weaponry (be it technological or persuasive) can bring down fundamental infrastructures, inflict mass casualties, or infect millions of minds with their delusions in short order – a cunning manipulator who can program minds with triggering words can do a lot with Twitter. Sounds outlandish – but it could be argued that we have our first Twitter President.

So what to do? Well, we can work on our self-awareness of how our nervous systems work. Here are some practical steps:

Consume less news. It's garbage, usually wrong, mostly irrelevant, manipulative, and it's killing you. Your heart has a far better story.

The heart of civilization does have a story to tell – it’s just a matter of using our brains as filters against the horrors and discontents of childhood wounds. The heart pounds, and the brain listens. Sometimes. One flash of clarity can reveal a world you never knew existed, a place to explore unimagined opportunities.

Ironically, it may be that the right kind of advances in so-called AI might temper our cognitive biases, while freeing us up to do the hard work of emotional clarity: creation. Then again, that may be magical thinking – a cognitive bias of mislead technocrats.

In the meantime, challenge yourself.